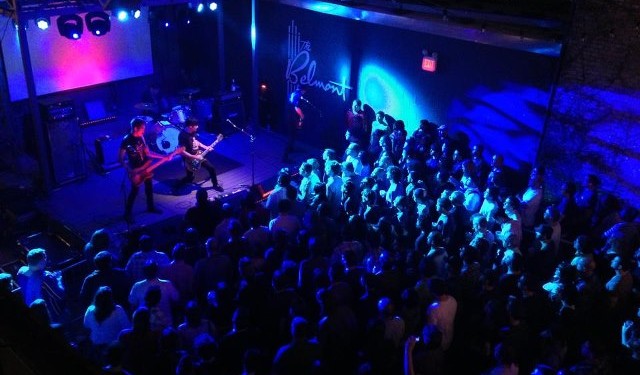 When May hits Austin, Texas this is usually the time when the heat begins to rise in town and the A/C gets cranked up, but an unusual cold front led to a much cooler evening for …And You Will Know Us by the Trail of Dead’s return Austin performance at the Belmont this past Saturday. Billed on flyers as a performance of what many might consider their opus, 2002’s “Source Tags & Codes.” The performance in actuality drew from most if not all of their catalog including the 2012 release, “Lost Songs,” and delivered.

The thunderous chant of, “Ode to Isis,” began the night as the song climaxes from a choir into the band’s name followed by the pummeling chords of “It Was There That I Saw You.” Singer Conrad Keely’s voice seemed more on in the night and improved. Lead guitar and drumming duties are now passed off between Jason Reece and newer drummer Jamie Miller (formerly of Snot). The revolving door of drummers and bassists seems to be over for now for the band and former longtime member Kevin Allen is departed and Autry Fulbright is on bass. Miller brings a definite technical improvement in abilities on both guitar and drums, and is a good grounding energy if possibly lacking in ferocity. This is where Reece and Keely more than make up for it as the show’s build clearly took off on the blistering 3-chord, hardcore punk rock of “Homage,” as Reece’s yell quickly turned a more docile crowd into a mosh-pit and frenzy.

Conrad Keely Performs at The Belmont

Trail of Dead previously kicked off the re-opening of The Belmont in West 6th and it for now appears to be the newest home for the band as Emo’s off Red River fades into a memory replaced with the Riverside location.

West 6th and Trail of Dead seem like an usual mix with the band’s roots in other scenes, but the venue is top-notch in both sound and a gorgeous presentation of the rapidly evolving Austin skyline.

This could never be said for Emo’s at its previous location or it’s restrooms and give’s the band more of a chance to shine with better acoustics.

The epic, “Will You Smile Again?”, an homage to Brian Wilson and tale of writer’s block kept up the power of the band and shows what’s left in rock and roll these days in a world that seems to embrace retro rather than look forward musically. The 5/4 intro comes hard, slows down, turns into a stomp, and comes back around one last time. Reece’s whisper on,  “Aged Dolls,” a tale that seems about days in Austin goes from a delicateness to a ferociousness reminiscent of the best of Fugazi with him clearly able to juggle both quality and passionate singing with a perfect yell.

Disappointed Pitchfork fans may have come for, “Source Tags & Codes,” but the band delivered an amazing set and the energy is still the same as always which has forever made them a  fantastic live band which always performs, if delivers a setlist that rarely strays far from the path, and for the band has worked for almost 20 years now. That said, it definitely works.

Ode to Isis
It Was There That I Saw You
How Near, How Far
Homage
Catatonic
Up to Infinite
Flower Card Games
Another Morning Stoner
The Spiral Jetty
Weight of the Sun
Will You Smile Again?
Aged Dolls
Totally Natural
Caterwaul
A Perfect Teenhood