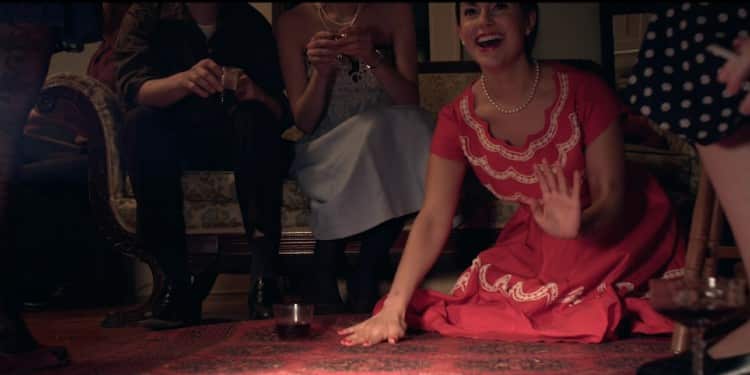 Unsurprisingly, we’ll start things off with a local artist Spoon, and Britt Daniel’s tale of, well, jealousy. At first the video begins with a close up of his mouth, which seems will be what the entire video will consist of until the camera pans up, showing Daniel singing along in a depressed state with a Lonestar beer close by.

Later, the shot moves out even further to see Daniel lying on the dirty floor of a bathroom next to drummer Jim Eno in a comatose state. The song isn’t one many Spoon fans are familiar with, coming out before they had any popularity, but it’s a great one. It was shot locally in the bathroom of Hole in the Wall.

Pancho & Lefty was originally written by Townes Van Zandt for his 1972 album, The Late Great Townes Van Zandt, but hit #1 on the country charts when Willie Nelson and Merle Haggard covered it in 1983. The video shows a dry Texas Hill Country, but more importantly, it has scenes of the infamous Hotel Alamo, located at 6th and Guadalupe shortly before it closed.  Hotel Alamo featured a bar and lounge home to the outlaw country movement with Jimmie Dale Gilmore, Joe Ely, Robert Earl Keen, Lucinda Williams, Townes Van Zandt (featured in the video), and more. LBJ’s brother used to live there, and it featured an underground “massage parlor.”

The Alamo Hotel at 6th and Guadalupe is also featured in our #1 movie. If you haven’t seen the Townes Van Zandt documentary Be Here to Love Me, by Austin film make Margaret Brown it is a must.

Shoegaze is sexy in Ringo Deathstarr’s “Two Girls” with lingerie, masks, and punk rock t-shirts. An out of focus homemade quality to the party give it a much more realistic feel.

Trail of Dead bring back the punk rock with “Catatonic,” in a video that satires a politician that seems to resemble Governor Rick Perry (or many other politicians) with band co-founder Jason Reece playing the lead role shaking hands, giving speeches, getting drunk, doing some blow, a tryst in a bathroom, buying bongs, waving flags, visiting strip clubs, punching a guy in the face, and ultimately ending up homeless.

So being a politician is a lot like playing rock and roll, apparently.

Austin’s landscape marks the video throughout shots ranging from downtown, the capital, the drag, and more.

Megafauna’s “Haunted Factory” showcases a dance co-choreographed by guitarist/vocalist Dani Neff with the right amount of madness and explosive rock and roll shot at the Austin State Hospital, the oldest psychiatric hospital in Texas. Over 20 hours of dancing went into the creation of the music video.

Quiet Company go all Office Space on the printer to a piano which then is re-built into a city in their video for The Emasculated Man and the City that Swalled Him by Justin Kirchhoff at Digital Shakedown.

The one shot take of Spoon’s, “The Underdog” is the highlight of this video and the second from the band on the list. The unbroken steadicam shot is chock full of Austin cameos. The music video seems to follow two characters starting with Jason Reece’s Trail of Dead and Hunter Darby as the engineer while coming back to Spoon, a mariachi group, in an Austin, Texas recording studio.

The album and song “The Suburbs” documents Win and William Butler’s upbringing in The Woodlands, Texas, a suburb of Houston. The album might have been about their lives in Houston, but the music video was directed by Spike Jonze following a group of teenagers living in the suburbs which takes a much darker tone, reflecting the ominous if beautiful vibe of the song.

#2 The Clash – Rock the Casbah

It’s hard to believe in this day and age, but The Clash’s “Rock the Casbah” reached #8 on the Hot 100 Billboard chart in the US (the radio where basically you can hear nothing but sleek hip-hop and pop), and the music video was shot around Austin. The music video was “low budget” and depicts an Arab and Hasidic Jew befriending each other, drinking the Texas classic Dr. Pepper, going to a concert at Austin’s former City Coliseum following a friendly armadillo, and interspersed with the band playing in front of an oil well.

Directing duo Peter Simonite and Annie Gunn did the video “Postcard From 1952,” which perfectly encapsulates everything that’s great about Explosions in the Sky. They have always been a cinematic band making something beautiful out of just guitar, bass, and drums, and the video is shot beautifully to capture that. Moving in slow motion, capturing nostalgia for the time period perfectly with a white picket fence, kids, mom at home until it turns into loud, melodic, chaos and climax that is their signature.

Postcard From 1952 from Explosions in the Sky on Vimeo. 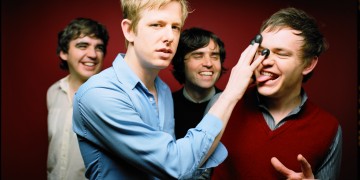