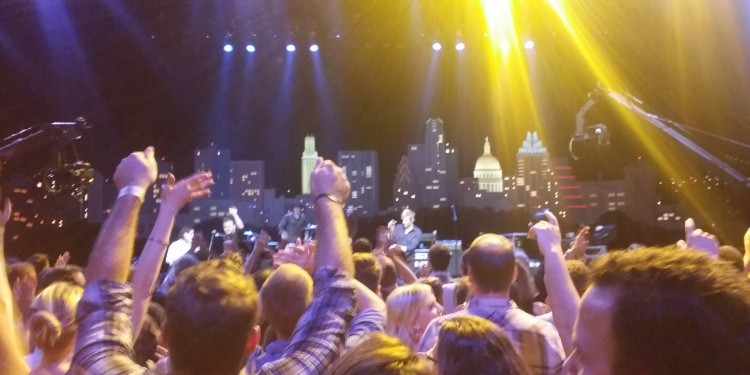 Spoon returned to Austin for their fourth time for an Austin City Limits taping last night at the Moody Theater.  The set began with two songs from their new album, They Want My Soul with “Knock Knock Knock,” and the AC/DC like “Rent I Pay”.

The crowd was still quiet to the new songs until they launched into the “The Way We Get By,” their popular single used all over television in the 2000’s. Nothing was played from Girls Can Tell or any albums previous on the setlist tonight missing many of their classics in favor of songs from their newer records include Transference‘s “Who Makes You Money” and Ga Ga Ga Ga‘s “The Ghost of You Lingers.”

Lighter fair started out most of the evening, but things kicked up with “The Beast and Dragon, Adored,” as the noisy guitar solos sent mics flying. This energy contuued through to “Don’t Make Me a Target,” and a much heavier version of Spoon’s biggest hit, “I Turn My Camera On.”

“Got Nuffin” followed this pattern until they turned things down for “Black Like Me.” Wrapping things up with an encore of “Outlier,” and “Underdog,” Spoon proved that there’s a reason they’re one of the dominate and popular forces in rock and roll and have been able to maintain that. At their lightest things get slower, but when they let loose they truly do with Britt Daniel yelling at the top of his lungs, and guitarist Eric Harvey taking down a few mic stands and his guitar cord before trashing them.