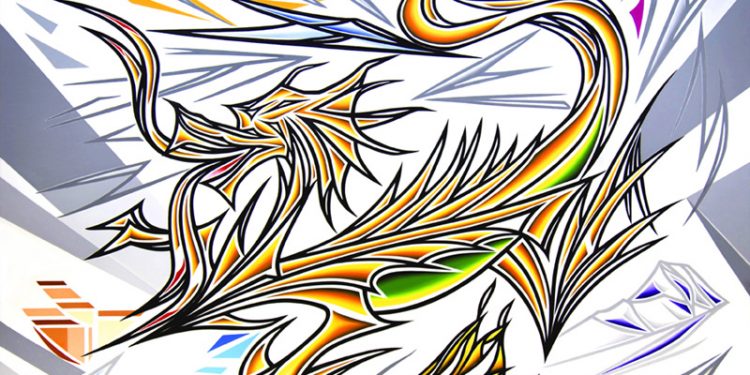 In our global economy and political spectrum, two worlds seem to exist. We are either productive or fruitless in the gross domestic product and leaning to the right or the left in political stance.  Austin artist, Chamel Raghu, highlights these issues in his latest creation, “The Rebirth of Asia,” an oil painting that stands nine feet tall, showing a sharp and pointed mythological dragon. 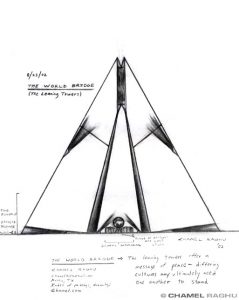 Submitted sketch for the World Trade Center Memorial contest. It was posted on the www.cnn.com

He recently displayed the painting at an Austin Art Studio Exhibition, and in the interim, it rests in his home on the outskirts of Austin. Raghu has a love for classical music, as at the time of the interview, he was watching a Youtube of a violin concerto he heard at the Austin Symphony Orchestra concert the night before.

“The second movement of this violin concerto is meant to be relaxing, right?” Raghu asked in regards to Pope Benedict possibly falling asleep during the performance on the Youtube of choice.

In previous coverage, there was speculation that he was a recluse, having some health issues, and mysteriously disappearing, but those concerns can be put to rest. Raghu is in good health, charming and charismatic, hospitable to his interviewers, and a humble artist.

“The weirdest thing I’ve heard is from one guy who said ‘wow, I wish that old man could walk,’ [laughs]” Raghu said. That’s when I started realizing, ‘man, where are people getting information, you know?'”

In 2002, Raghu submitted a sketch for the World Trade Center memorial, composed of a pyramid, and it was posted to the CNN website. However, the same figure was used for a war monument in Portugal. At first, he was appalled and upset that it was possibly taken from the website. Later, he realized there was a positive outcome. 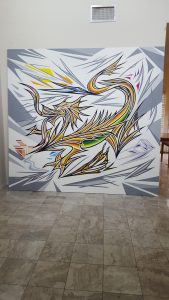 “Now, I see it as they made it prettier than I did,” Raghu concluded. “I think it’s more beautiful than what I drew. I think it’s well done.”

As for the “Rebirth of Asia,” Raghu began drawing the sketch about six years ago. It was the beginning of a more rewarding endeavor.

“Initially, the dragon composition – I drew that in 2010 pretty quickly, ” Raghu said. “That was done years ago, but the things I had to manipulate were the elements around it and then the color. I was pressing with it all the way to the end. I do not have ease with color.”

Even though it was a challenge, the colors seem to be one of the best traits of the painting. They accent each point and edge on the dragon, having an aggressive and progressive aesthetic. Because of the coloring, the figure seems to pop out of the canvas therefore emphasizing the comeback of Eastern relevance.

“I envy the Italians,” Raghu said. “When I was in Italy for a little bit, I just noticed that the men and the women, they all love color. They’ve got scarves, they’ve got different colored socks, and then they match. How do they do that? I just go simple as I can. I don’t want to put three [colors] in there, because if three go in there, to me it’s like a chord that doesn’t fit. It’s too many chords.”

While color simplicity is one of his natural tendencies, he is not simple in terms of intellectual discourse. Raghu is half Indian and half Chinese, therefore already coming from an Eastern perspective. He believes that our global economy is now gearing toward the East, where Asian countries will have headway on technological and economic advancement. Perhaps this is why previous journalists called this creation, “the painting of the century” – a hype that was covered by Art World Austin. “The Rebirth of Asia” raises many questions, and while I am not an expert on global gross domestic product, recent reports do speculate that China is on the rise. I am also not a historical expert on art, so I would not be able to confirm that this is the “painting of the century,” but it definitely reflects the times and is historically significant in its own right. 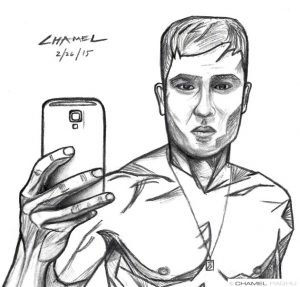 “I gave it the name because I thought that the dragon would symbolize something economic and political, ” Raghu explained. “I’m calling it an Asian mythological symbol that is basing from right to left, basically from East to West. I am saying that things are cyclical, that we are geopolitically, and we are economically at a hinge point in human civilization. For maybe one thousand years, Asia had control of thirty to forty percent of the world’s GDP. It’s dwindled, but it’s coming back. I’m saying that, cyclically, that Asia is coming back.” 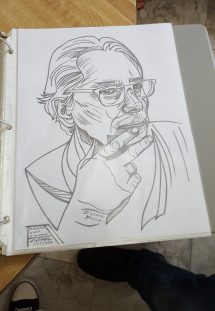 Raghu’s colleague, Tim Doyle, believes this painting represents an Anglism movement, where the points and angles represent a deeper meaning. Raghu confirmed that the forty-nine points in the painting symbolize the forty-nine countries in Asia. Of course, at the time of the drawing it was forty-nine, but now it is forty-eight. In an earlier article by MFA Digest, Michael Cohen mentioned Anglism is the first of three movements. What shall be the next two?

“There are some other ways I’ve painted and drawn that I have not shown, ” Raghu added. “Those maybe down the road, I can show. The reasons, I can’t really say right now. I’m still in flux. This particular style is the one I feel most comfortable with right now.”

Aside from this venture, Raghu thoroughly enjoys his drawings and is thinking of selling them at some point. Still thriving on the simplicity of art, the drawings are a quick outlet of expression for him.

“I tend to enjoy the fleeting nature of the drawing more,” Raghu said. “It can be in and out and done so fast. It’s kind of like you were to compose something very quick for a single violin. And, there’s no color, which is also another reason why I like the drawings. No complication.”

As for complicated matters of society, he would like to represent those in his art and hopes that his audiences will see that.

“In the future, I would hope to bring awareness to certain atrocities, ” Raghu concluded. “I would like to highlight it.” 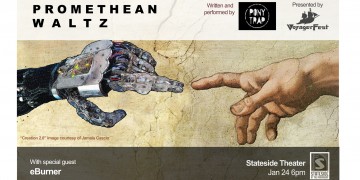