In the year 2000 Queens of the Stone Age were heralded by Rolling Stone magazine and other critics at the time as the band that could save rock and roll.

That prediction never came to pass for the band nor the impact to the cultural zeitgeist along the lines of Nirvana’s Nevermind.

In 2013 this might be true. In an era party of songs or the latest folk trend, Queens of the Stone Age dig-in, go deeper, darker, and with a depth not before seen creating a modern rock opus with …Like Clockwork, a tale of Homme’s recovery from a deep depression and near death, coming out of the fog, and creating the most authentic, personal, powerful, and best work to date.

“I woke up and there was a doctor going, ‘Shit, we lost you’,” Josh Homme, the founding and only continuous member of Queens of the Stone Age, told the Irish Indepdendent.

“I couldn’t get up for four months. When I did, I hadn’t got a clue what was going on. But in all honesty, the last couple of years of failure and anguish have been the best thing to ever happen to me. It gave me a chance to figure out what’s really important to me.”

The recording process it’s self was arduous even when it began, ““Work has always saved me. It’s fucked me up, too, but it’s always pulls me out of trouble,” he says, with the title of the album mocking the process. “Everything kept fucking up ‘like clockwork.’

The undercurrent of the record is just be honest, and if something is scary, walk toward it, not away from it,” Josh confirms. “There’s no other way I could have said any of what it says. I just want it to feel real. I think: if I do this from a real spot then we could be someone’s favorite band in the whole world. And, ideally these records, if you do ’em right, make you a little better as a person. Especially for me. I don’t work at a fucking bank, so I’m gonna bleed for this shit until all the blood’s gone.”

With the sound of a massive kick drum, “Keep Your Eyes Peeled,” begins the record with a dark, and dirty riff complimented by piano and Homme’s falsetto, on it’s own very pretty force, but in sharp contrast to his lyrics, “Shotgun, never behind the wheel anymore/ Danger, monsters of smoke and mirror/  Slowly, can one so lost be found?” eventually the song cascades into a scattering attack of guitars, tripped out harmonies and melodies, and ends on a cello.

Homme wanted friend Trent Reznor to produce  …Like Clockwork, although Reznor merely shows up on the album as one of the many guest performers including Mark Lanegan, wife Brody Dalle, Elton John, former bassist Nick Oliveri, and Dave Grohl. It seems logical Homme would want Reznor as a producer  as the album is darker, and more personal than any QOTSA record before.

Home told his band members, “I had to ask them ‘If you want to make a record with me right now, in the state I’m in, come into the fog. It’s the only chance you got.’ It brought us much closer, because you never really know someone till everything goes wrong.”

This also meant losing along the way drummer Joey Castillo who was fired after ten years from the band and a third of the way through recording with Dave Grohl brought onboard for the majority of …Like Clockwork.

The elements that have made the band before are still here, it’s just that the song seems have a new focus, come from a deeper more personal space on all songs. And although Them Crooked Vultures bandmate and Led Zeppelin member John Paul Jones didn’t appear on the album it seems it seems the thunderous rock influence and blues of Zeppelin has come more to the forefront with no real quick, heavy, and fast punk rock songs that scattered past albums like, “Quick &  to the Pointless,” from Rated R  or past single, “Little Sister.” For now, the punk rock is on the shelf.

Homme is older in the six years since their last release, and no doubt literally being dead for a moment during surgery has matured him and matured his songwriting to another level. There is no filter, and the album doesn’t overextend it’s self in the number of tracks coming in at just 10 songs, but near perfectly laid out and without any misses along the journey. Dave Grohl certainly does his best Jon Bonham impersonation throughout the record, not overplaying himself or throwing out any tricks but keeping the beats and rhythms sharp, simple, and on point.

A sense of mortality is throughout the record,  and loss . Homme hints as his passing The Vampyre of Time and Memory, “I want God to come and take me home/ Cause I’m all alone in this crowd Who are you to me/ Who am i supposed to be/ Not exactly sure anymore/ I survived, I speak I breathe I’m incomplete/ I’m alive, Hooray!/ You are wrong again/ Cause i feel no love.”

“If I Had A Tail” has a perfect Zeppelin stomp and chords, a true perfect rock song that segueways gracefully into the first single, “My God Is The Sun,” the fastest song on the album with hooks as good as, “No One Knows,” and a perfectly dirty bass backed up with Dave Grohl’s finesse.

…Like Clockwork is almost overflowing with contributions and guest appearances, but other than Grohl  and Elton John their influence is merely slight and Homme remains at the forefront.

Melancholy is the note the album ends on from the song of which the album derives it’s title, …Like Clockwork which closes out the album beginning with a brooding piano and tale of loss, Home repeats throughout the song until the album ends, “Not everything that goes around comes back around, my dear/One thing that is clear: It’s all downhill from here.” As the song transforms again as many on the album do into a bluesy guitar lead, before building once more, and settling out on a perfectly tranquil moment.

With more authenticity Queens of the Stone Age are back from the dead, and have created an epic triumph of rock and roll.  The album is the near perfect combination of fantastic songwriting with no filler, showmanship of production, musicianship, and performances. QOTSA may not have saved rock and roll, but for now they’ve give it a new hope. The only question is if  anyone is listening. 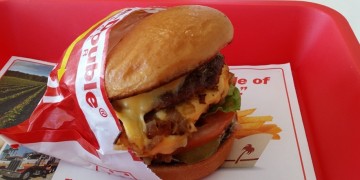